“Pathetic” would be too mild a word to comment on the way “issues” related to SNC Lavalin’s contract with KSEB for their Pallivasal (and other) plant renovation works are discussed currently.

Depending on exposure, social, political (even religious) inclinations each one of us know the issue as one or more of the following:

• Battle between conservative and revisionist elements within CPI (M)
• Personal ego clash between Pinaray Vijayan and VS Achudhananthan
• Rendaam vimochana samaram – a curtain raiser
• Fight between the good and the bad
• Personal corruption of Pinaray Vijayan
• Organised corruption by political parties.
• Misuse of constitutional and regulatory authorities for political and personal vendetta.
• Loss (to the Government) of 33.20 Crore rupees paid to SNC Lavalin as cosnultancy and other fees.
• Loss ( to the Government) of 89.32 Crore Rupees due for Malabar Cancer Institute.

Discounting the possibility of both these outcomes being influenced by factors like lack of witness, skill of the lawyers etc, we can fairly consider that the issue has met its logical end, once the verdict is out.

I would like to guide you to the 15 page document issued by CAG’s office in the year 2005. It was a summary of findings listed after a detailed review of “Renovation and modernisation of Pallivasal, Sengulam and Panniar Hydro Power Projects by Kerala State Electricity Board”

Two lines, culled out from different portions are as follows:

The Board undertook the renovation and modernisation of Pallivasal, Sengulam and Panniar hydro electric projects ignoring the recommendations of CEA regarding the good condition of the plant at Pallivasal…….


The absurdity of the whole episode lies not in the lines quoted above. It lies in the fact that none of the mainstream media discusses this absurdity. We have been force fed with the sentimental angle of Cancer Institute and personal involvement of high profile pesonalities.

Think of a project to build a bridge across a river. Even at concept stage, its pointed out that the bridge wouldn’t serve the purpose. And after spending considerable amount of money and time , once the bridge is built, the people still use the ferry instead of the bridge!

And the whole population (including the newspapers;the absolute adjudicators of modern day justice , the know-all TV anchors; literate consumers in local chai shop and toddy shop; e mail groups etc) is discussing the fate of a single person – And he is being tried for the colour he ordered for painting the bridge!!

Summary of CAG report is available at : http://www.cag.gov.in/html/cag_reports/kerala/rep_2005/com_overview.pdf

deatiled report is available at  http://www.cag.gov.in/html/cag_reports/kerala/rep_2005/com_chapter_3.pdf 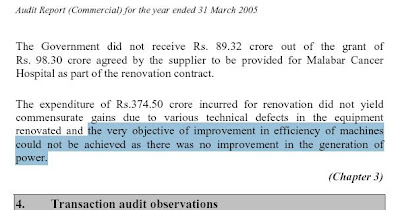