Colours of Slumdog and the Millionaire. 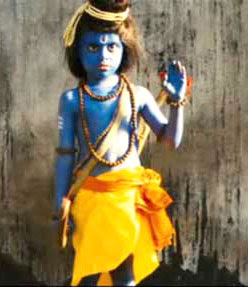 Jamal, desperately trying to escape from the makeshift toilet where he is trapped, jumps into the pond of s**t. Unmindful of the dirty fact that he is fully covered in yellowy s*it runs to meet the film star. Even as the surrounding crowd is put off by the smell, the film star (clad in an yellow coat) reaches out to Jamal and obliges leisurely with an autograph.
Apart from the obvious attempt by a firangi (foreign) film maker to poke fun at Indian film viewer's 's**hit standard' of appreciation and the 'naturally' obliging Indian cinema  stooping to the same levels, should the colour of yellow be taken so seriously while viewing the film?

Yes is my answer.

Through out the film, a deliberate attempt of  two- colour composition is evidently displayed.

One of yellow. And the other blue. Blue being the signature colour of the Millionaire reality show is a natural selection.

At any given point, every frame is either given an yellow tint or a blue one. And in some exceptionally beautiful ones, a combination of both! Some of the frames are either horizontally , vertically or even diagonally split into these two colours.

Seemingly insignificant items of   irrelevance  are decoratively placed in some of the fleeting frames so as to maintain the weight of colour yellow . (Like the paper tray in police station, cartons in the hotel kitchen etc...). The beggar van is painted yellow on the outside and blue on the inside. Call centre, furniture in Javed's house etc are prominently blue.

Not to talk about the dress- especially of the three musketeers (during various phases of the story line)  and the inspector!

Ah! Yes! The child Lord Rama who makes his appearance exactly at the point when the children are made to shed their innocence.

Like the sound, music , movements and dialogues, the colour pattern should be considered to follow the movie.

The one character who weaves in and out of these two colours with ease  is the inspector.(like in his introductory scene where he enters a room from where streaks of yellow appear through the gaps in the door! ) I would use the word 'interlocutor' to define him. He is the one who seeks the answers (jnana). But he makes it clear that he has other set of (personal) questions- different from those which we as part of (and products of ) the massive reality game show are looking for!

What is the movie about, after all? What are the questions being asked? And more importantly what are the answers?  OR WHAT IS THE ANSWER?

Depends on how you interpret the colours and where you find the final denouement.

Does the story (!) end where Salim kills himself , Jamal wins the game show and Latika joins him?

The  way Jamal faces his moment of victory (in the game) with a sense of detachment, even reminiscent of the 'Gita' while those around rejoice is ample evidence to the fact that his goals lie elsewhere. (He even makes an explicit statement that he joined the game hoping to find Latika.)

Latika, while declaring that she doesnt know the answer for  the final question has her face glowing with controlled contention.

Salim, as he dies in his grave of bank notes doesnt seem to have any regrets. (he has already atoned for his sins- "God forgive me , I know I have sinned!")

But, are Salim, Jamal and Latika three different characters or manifestations of the same?

Two trains chug out of VT station. One blue.. and the other .. yes you guessed it!

foot note: Does all this exercise  result in a good cinema?  No.
We have enough gurus here in our land to teach Danny Boyle a lesson or two in his chosen karma!

babu:
I tried to watch this movie two times. One lasted till Jamal falls into the shit pond, the other attempt lasted only a few minutes. Even with irfan & anil kapoor there, I felt it wasn’t my kind of movie, and thought I would watch it when I grow up reach that “level” to enjoy the movie.
Now that you had the courage to watch the full movie and blog, I should also give a try. Will comment on it soon

Great observation, your interpretation makes me watch the movie a second round.

I enjoy the show for its humble biography of Jamal. Maybe experiences in life is the answer to many questions in the world.

But I don't really get the colour significance of blue and yellow. I don't understand.

Could you leave an interpretation on my blog comment for the movie topic? I would appreciate it.

I watched it, after reading ur blog. You are good in looking thru your glass. I have noticed the colour mixing in the frames, which you have been mentioning. But the last two trains are bi-coloured (blue+yellow & red+yellow).
... yellow jamal getting autograph from big B, is disgusting.
All this is fine, but what is this movie all about? What are the criteria for selection at oscar? Only those films, which makes a little bit of controversy, would get into the panel it seems?!

Anyway your scrutiny on the film is good, good observation

we indians are complicated ,we think a lot and never get the time to excecute anything........how true,,,we tear things apart (movie in this case) but never prove our point ,the questions that made the rounds
1) y didnt an indian direct the movie?
2)wud the movie have been nominated at oscars if an indian has produced and directed it?

i heard priyadarshan sayin that sdm was notin but the old masala hindi story like wat javed -salim had done decades b4,,priyan look at ur back yard u have a factory of recycling runin 24X 7

but y ,y just SDM havent we all gone ga ga over a dozen good for notin movies which won the oscars
b4? This is a danny boyle movie ,watch his previous movies u will know what i mean.give it to that guy he is a magician.

it won an oscar cuz its an english movie,and produced by a english studio,distributed by eglish frim.dont we indian have inumerable awards back home get them ,,,,,and in case if u get an oscar get them tooo after all cinema is an art and art has no oundary...

I'm so glad you wrote this! I also noticed this in the movie (yellow I noticed, but I didn't pay much attention to the blue until after I read your input..and now you have me thinking about it, and you're SO right!). I loved the movie, and I can't wait to see it again so I can actually see all the blue!

I did notice yellow..But blue didnt reach my eyes...But your input on that is mind blowing!!

Hi! I have seen this movie like 5 times and I always wondered about the colors, thank you very much for this :)
By the way, just reviewed your blog and loved it :D I love indian culture but not always know where to find about it, I mean, like things only indians know about. It's great and your photographs are beautiful!