An old carpenter* brings home a duck in his tool bag. Along with two bottles of arrack and a wad of demonetized currency. Even as the duck gets cooked with a potion to get him grounded,  the sea churns itself into a cacophonic  storm.

That would be the single line plot of the malayalam movie Ea.Ma.Yau at the end of which in serene shores  the carpenter's duck (and the gravedigger's dog) await the brightly lit boats  from opposite ends escorted by music that is literally 'soul lifting'. 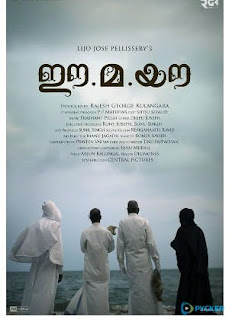 The Father, The Son , And The Rest Of Us

When the member states that it is our responsibility to offer a proper farewell to those who are leaving us, we all do know that he was not referring to the cop who is being transferred to a distant station.
*

The sea, is omnipresent in all its forms- physical, emotional, spiritual, acoustic - through out the movie. All through the initial portions , sea remains just a few calm waves washing the shores gently and rhythmically. But, when the old man falls  and  the girl runs out reaching for the neighbour ... ...
It is then that the sea raises its voice for the first time.

And through these  interconnected cries , the rain clad movie about a very ordinary death  is enhanced to a higher  plane of socio political dimensions.

Had demonitization not happened and his life savings not been reduced to garbage even the cow would refuse to take, Vavachan Mesthiri would still have had a fairly good funeral.
Or for that matter, had the chavuttu natakam viewing not been interrupted by a phone call from the corrupt Lazarus who fudged the books after taking money for his own mother's funeral, Eashi could still have reached out to his father even before his fall. Twice - first by the vicar and next  from the Doctor- we hear  the compelling social comment about interchangeable roles of the religious head and the police chief.
When the democratically elected but helpless panchayat member  begs in front of the religious head and gets snubbed pathetically, contemporary political canvas of Kerala projects itself brilliantly. And at the  altar of  Capital (   മൂലധനം  is the word used in the movie ) armed to the teeth  with the deadliest blades,  the woeful citizen pledges himself only to get pulled in by casket consumerism.


All the characters in this movie  have a life and a story of their own. But, every time they come on screen, in addition to playing their part and lending the movie a certain influence, they also compliment  other characters. Like for example, during the vicar's initial probing visit to the house, Nissa's lover Sivan delves in and out of the  window frame, mimicking the vicar. The jilted lover with his broken clarinet is one such character that has different stories to tell every time he appears on screen. The neighbour all through the movie chides Lazar for his scandalising characteristic. But the moment  Saramma takes off with his bike, he sheds his assumed moral posture and becomes just like any of us. The characters move in and out of each other with much ease erasing the thin line of right  and wrong, just like Sabeth's ornaments transforming fluently into a costly burial box. Or the gravedigger occupying vaavachan's grave and time. Or the all pervading Ayyappan ,who, Easha had assured his father "will take care of everything".
And yes of course the duck.
And the dog.

The dog. That appears only in three scenes all through the movie. Emerges for the first time when the card players chase away the lovers. And then when Simon is ready for the angels of death. And finally, with the old man's duck awaiting the boats. Between the dog,Simon and  the old man , the question to Nissa that the old man leaves unasked gets buried.


Two characters that remain unaffected by the storm still continue with their game of cards. They are the time keepers who introduce themselves as 'time' in the very first dialogue of the movie. Caught between the guy from printing press who wants to know the time of burial ... and ... the unrelenting vicar who is the dispenser of time, Eeshi's character decides to carry the cross all by himself.

*Eventhough the film is set in a coastal village, the death (and deliverance) is not that of a fisherman. Vavachan Mesthiri is a carpenter. Early in the movie, Nissa tells her father that the frame that he had done for the church 'in wood' is about to be demolished. And later in the night, the drunk Doctor's wife refers to Vavachan as the one who 'carved the altar in one single piece of wood'.

If Eashi reminds one of another person by the same name whose father also happened to be a carpenter, ... well.. now, THAT, is another story.