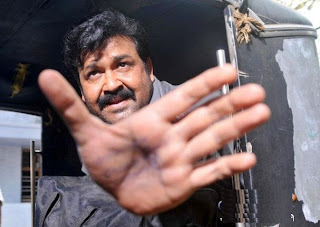 Brahmaran (The Buzz)
Quest of man to bring home truth . Or with a dash of pun, can be rephrased as “driving” home truth.
Truth, which lies forgotten deep down the paranoic rush hour needs to be dug out and brought home so as to establish one’s own identity.
What elevates the movie to a higher plane is the deft suggestion that each one of us is the seeker (as well as the one sought ?). Vishnu? Shivankutty? The terrorist who placed the bomb? The highjacker? The kidnapper? The murderer?
Or the prostitue trying to read it from Vishnu’s palm?
Only those with the highly disturbing inner drive (buzz deep down inside) can cut through the mad traffic!! Rest of us would miss the bag under the bed and follow false leads.
Through some excellent camera movements, and tight script work director Blessy starts by taking us on a feverish roller coaster ride of suspicions, insecurity , confusion and mis placed values of the modern day materialistic world. (Coimbatore under siege by terrorists is the back drop)
Subsequent pieces of journey mystifies as much as it unravels.
From the split second red and green world of stock exchanges, the movie shifts gear to the winding roads that take us to the virgin lands. The journey in which the movie maker forces us to accompany him has some definite intentions.
“My house lies shattered . It is your duty to set it right!”
“ Only those who have nothing to lose will be able to carry out a revolution!”
“I too have a family. Those with education and wealth think I should’nt have one?”

The movie ends in a remote Indian village with a message of love , shared by the new generation. What happens to the white Pomeranian puppy depends on how safe the carriers take it back home .. to the the city.
Blessy will come back again to tell rest of the story?
But next time, he should give his editor a more free hand so that portions like the silly song (even if its one line) unni sings can be edited out.Also the long drawn out fight in the roadside dhaba (macho image of the protogonist is other wise established – “njangade naattee ithine paambenna parayunne”)
Blessy, who broke many a rules should violate the 2.1/2 hour format of malayalam movies to make it crispier.

You write well. I'm mystified and interested to know more about the movie after reading your blog. Wondering how the music was. I think what makes Blessy a fine director is that he gets the viewers to think. His movies are thought provoking and the screenplay is usually very good. I can't wait to see this one.

Curious to know, what's your take on Calcutta News?

I have a different take on those 2 points (the one on that "silly" song by Unni and the dhabha fight).

Unni's song has a meaningful line "changaaththam koodaan vaa..". That is the time Shivankutti is in a dilemma. In the previous scene, he washes off the writing on his palm (wash-basin) indicating that there is nothing much to be settled.

That dhabha fight appeared to be playing to the gallaries. But Blessy mentioned, in an interview, that it is this fight that triggers a fear in Unni's mind that Sivankutty cannot be conquered with mere force. Till then, Unni has a mere contempt/irritation at Sivankutti who is shown as a simpleton/appaavi with a justified mission. Unni believes that he can side-step Sivan-kutty with the help of his friend... Otherwise he wouldn't choose to travel with him. With that fight scene, an element of mortal fear comes in.

Anywayz nice to read your review.

btw, Murali-Krishna, who plays Alex, is the son of Bharat Gopi.

manoj,
i said "silly" in the context of this movie. The same song scene would have been a very impressive one in a fazil movie. Similarly, the fight ...
But blessy (especially with this movie is attempting to outgrow them all) could have done it better.
Also, is there any need to convey the physical might at all? The shear terror experienced in the following cliff hanger scene would be enough, isnt it?
And its not just his physical might that is feared by Unni. later on we could hear him say that even if he could escape, he is sure that Shivan would find him wherever in the world and harass him.

Nicely written :) Was expecting a lot better from Blessy with the movie, but sadly it was disappointing.

Yes you made a good point here - "Blessy, who broke many a rules should violate the 2.1/2 hour format of malayalam movies to make it crispier.

// The shear terror experienced in the following cliff hanger scene would be enough, isnt it? //

The key here is that it was the "following" scene (at least for that Unni character).

// And its not just his physical might that is feared by Unni. later on we could hear him say that even if he could escape, he is sure that Shivan would find him wherever in the world and harass him. //

The key here again is that it was "later on"

I agree that it could have been this way or that way... it cud have been done differently, may be it was over-stressing the obvious. But I was echoing what Blessy hinted in an interview. The element of growing fear culminating in Unni realizing that "Sivankutty is a maniac who can do *anything*"

btw, here is a link for those who are wondering how they cud come up with such difficult camera angles:
http://www.youtube.com/watch?v=k0SFWalSwx4

not yet seen the movie,want to see after reading all this,thanks