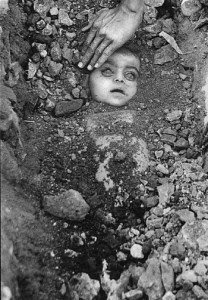 In its quest to bring technology and economic bliss to the doorsteps of native Indians, in 1979 the US multinational Union Carbide commissioned its Pesticide factory in Bhopal-- right next to the residential area.


It was from this factory that on the night of Dec 3rd 1984, the poisonous MIC (Methyl Iso Cyanate) gas leaked into the streets, entered the doorless huts, marble tiled posh houses, lungs of those sleeping in the pavements, Railway station, and even the trains ;It raged on for four hours killing more than 3000 people --like pests and worms. Even worse was the plight of those who survived: 3,60,000 people were afflicted with various forms of disabilities--most of them lost their eyes within seconds of coming in contact with the gas. Some managed to die their own slow deaths during the years that followed, but the rest of them? They are still waiting--not for any relief but the angel of death who comes in painful installments.

Could this (the tragedy itself and the continued misery of the survivors ) have happened in any of the developed countries?

This is a classic case study for Third World exploitation.

Two years after the plant was commissioned, in Dec 1981, Ashraf Khan, a worker in the Union Carbide factory died while handling Phosgene, a poison gas. Dr. NP Mishra of Gandhi Medical College, Bhopal conducted a Post Mortem but the report was not released --even after the workers' repeated protests.

In 1982, because of leaks in pipes carrying Chlorine, MIC and HydroChloric Acid, 17 workers were taken unconsious. A few cattle were found dead after drinking the water from puddles around the factory premises. Panic has already spread in the city of Bhopal. The people of Bhopal started protesting.

Experts from the parent company of Union Carbide were flown in and safety measures were studied. But the reports were never published nor the remedial measures implemented. These were known only during the inquiries conducted after the Tragedy of 1984.

But in 1984 Nov, a series of cost reduction measures were suggested. The cost paid by the people of Bhopal the very next month was that of the lives of those Indians--those who died and those who failed to die.

Safety measures that could have prevented the leak, or minimised the death toll were found to be either malfunctioning or totally missing.

Even after the Tragedy, Union Carbide took an agressively offensive and misleading posture. Initially it failed to name the gas that was leaked into the night of Bhopal. Later on when they finally proclaimed the name of the killer gas, it was temed as "irritating but not deadly" . When the Government declared that 3000 people died on the night of the disaster, the company claimed that only 2000 died because of the gas. ( Maybe they felt that the death of 1000 people because of natural causes was not an unusual case in the underdeveloped Indian city.) While the Indian Government claimed that 3,50,000 people were affected, the company shot back that only 25,000 of these were eligible for any relief, whatsoever.

In order to ascertain the facts, Delhi Science Society, Madhya Pradesh Science Society along with Students Federation of India conducted a detailed survey among 6500 families living around the affected areas of Bhopal.

The results indicated that 2.3% of the people were permanantly disabled. 12.4% of the people had occassional inconveniences. 24.6% of them could not carry on with their day to day affairs. Most of the affected are in the 16-45 age groups. Women were more affected than men.

Worse is yet to come. The games played by the multinational and the Indian Government in the court rooms of India and the US were of the nature of ridiculing the affected people of Bhopal. Even after several court battles and verdicts, the misrey of Bhopal continues...

When a piece of land is threatened by an enemy our political masters are swift enough to send in the brave soldiers and redeem it at any cost. But when the basic rights of our people are threatened?

When a child is kidnapped or is killed, the society as a whole is emotionally aroused. But every year when thousands of children die because of non availabilty of medical facilties, we express a criminally indifferent apathy to the massacre. ------Fidel Castro.

Good work.Didnt know this much regarding Bhopal tragedy. Indian Government, Dont know when they will give respect and security to human lifes.